Note that the horizontal top of the berm and towpath of the Enlarged 1842 Erie Canal can be seen below the tree line on the north side of the river in the right background.    This photograph must have been taken from the top of the upstream head wall of lock 7 as shown in the back ground of the following photograph. 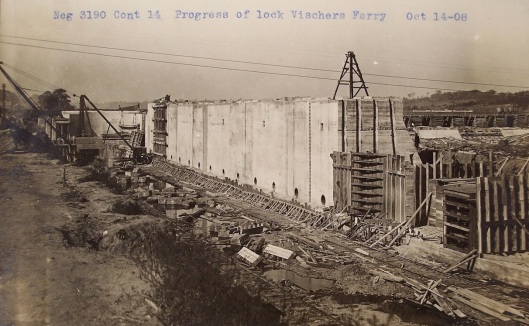 Construction of the north wall of Lock 7 is taking shape in this October 1908 photograph. In the foreground we can see form work for the down stream gate pocket under construction. The forms for the upstream gate pocket have not been removed. In the background to the left we see a couple of buildings of a large complex of shops and construction support buildings. In the right background one can see three barges on the 1842 Enlarged Erie Canal just above the coffer dam.

Construction of Lock 7 is and the dam is functionally complete in this October 1911 photograph. Progress on the construction of the early power house slices through the 1842 Enlarged Erie Canal. The towpath of the canal is seen in the foreground. This construction promptly brought an end to any remaining Erie Canal traffic that used draft animals as propulsion. All traffic in 1911 was using steam power.
An interesting footnote to this construction is added a century later. During the flooding that occurred after Hurricanes Irene and Lee the earth dam between Lock 7 and the bank of the Mohawk on the opposite side of the river had to be reinforced on an emergency basis when seepage was noted undermining that small portion of the dam. Thousands of yards of fill was brought in and placed on the toe of this earthen portion of the dam. Had this part of the dam failed the downstream flooding in Vischer Ferry all the way to Crescent would have been much worse. With this emergency fill Lock 7 was again functional by December of the same year.